Fortunately, there are ways to allay this problem. Genetically engineering stem cells to express proteins known to enhance cell survival is one way to ensure that implanted cells survive when implanted. However, getting FDA approval for a clinical trial with genetically-engineered cells will prove to be immensely difficult. A more promising approach is to pretreat the cells with various growth factors, growth conditions or drugs to precondition them to survive in the heart. To that end, scientists at the Davis Heart and Lung Research Institute at Ohio State University have used a commonly prescribed heart drug called “carvedilol” to enhance the survive of bone marrow mesenchymal stem cells in the heart.

Faternat Hassan and his colleagues in the laboratory of Mahmood Khan treated mesenchytmal stem cells (MSCs) from rats with carvedilol and a related drug called “atenolol.” These drugs are members of a drug category called “beta-blockers.”

Over ten years ago, Yue et al. (1992) and Feuerstein (1998) showed that carvedilol has the ability to quench the deleterious effects of damaging molecules. Therefore, carvedilol might protect stem cells from dying in the heart after transplantation.

To begin, Khan’s group cultured MSCs with carvedilol and atenolol for one hour and then subjected the cells to chemical stress by treating them with hydrogen peroxide. The carvedilol-treated cells survived the hydrogen peroxide treatment much better than either the atenolol-treated MSCs or the negative controls that were not pretreated with anything.

For their next experiment, they divided into five groups of six animals each. The first group was operated on but were not give heart attacks. The second group was given heart attacks and no further treatments. The third group was given carvedilol (5 mg/kg body weight) after the heart attack. The fourth group, was MSC treatments, and the fifth group received MSC transplantations plus carvedilol at the previously mentioned dosages. The results showed that the MSC + carvedilol group fared substantially better than all the rest (except for the sham operated group). The heart structure and heart physiology were far superior in the MSC + carvedilol group.

Finally, Khan’ group made a remarkable discovery. Carvedilol prevented the heart from undergoing extensive cell death and decreased the formation of scar tissue. When combined with MSCs, carvedilol’s effect on cell death was amplified. Further investigation demonstrated that carvedilol prevented activation of a protein called “caspase-3.”

Caspases are proteins that degrade other proteins, but they are activated when the cell is damaged beyond all reasonable expectations of repair and the only fitting response for the cell is to die. This process of programmed cell death is called “apoptosis.” The induction of apoptosis is, as you might guess, very tightly controlled, and one of the main regulators of the initiation of apoptosis are the caspases. Caspases exist as inactive enzymes in the cell, but they are activated if the cells is exposed to drugs,conditions, or chemicals that induce cell death. There are three caspases that activate the rest of them and they are caspase 3, 8, & 9, and of these, caspases 3 and 9 are the most important.

Carvedilol treatment caused a significant down-regulation of caspase-3 in heart muscle cells after a heart attack. Furthermore, it prevented the expression of caspase-3 in implanted MSCs, thus increasing MSC survival. Additionally, genes that are known to improve cell survival were also activated in heart muscle cells after carvedilol and MSC treatment.

Thus carvedilol did double duty. It helped the ailing heart, but it also helped the heart help itself by preventing the untimely death of transplanted MSCs. This allowed the MSCs to work their healing processes for a much longer time. The final result was that the carvedilol + MSC-implanted rats showed hearts that were in much better shape than the those in the other groups with the exception of the sham-operated group.

Induced pluripotent stem cells (iPSCs) are made from adult cells by means of genetic engineering techniques that introduce specific genes into the adult cell and force it to de-differentiate into an embryonic-like cell. This procedure might provide cells for therapeutic uses some day, but this technology must overcome the mutations introduced into these cells by this procedure and the tumors they can cause. Until then, iPSCs will remain off-limits as therapeutic tools.

That does not disqualify iPSCs as tools for research and even therapeutic investigation. This present paper that comes from a collaborative effort led by Ole Isacson, professor of neurology at McLean Hospital and Harvard Medical School in Boston, uses this very strategy to examine the response of patients with particular forms of Parkinson’s disease to various drugs. 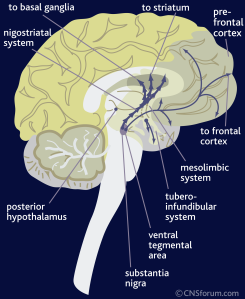 Parkinson’s disease results from the death of dopamine-releasing neurons in the midbrain. These neurons connect to cells of the “striatum.” The striatum is responsible for balance, movement control, and walking. Dopamine, produced in the substantia nigra, passes messages between the striatum and the substantia nigra, and when the cells of the substantia nigra deteriorate, which is the case of Parkinson’s disease, there is a corresponding decrease in the amount of dopamine produced between these cells. The decreased levels of dopamine cause the neurons of the striatum to fire uncontrollably, and this prevents the patient from properly controlling their direct motor functions.

Isacson found two Parkinson’s patients with inherited forms of the disease.  One of then had a mutation in the LRRK2 (Leucine-rich repeat kinase-2) gene, which encodes the Dardarin protein and is intimately involved in the onset of Parkinson’s disease.  The other had a mutation in the PINK1 gene (PTEN induced putative kinase 1), which encodes a protein known to enter mitochondria (the powerhouses of the cell).  Isacson used cells from each patient to make iPSCs.  He also used additional patients, and he had a total of 3 patients with mutations in LRRK2 and two with mutations in PINK1.

Could this mitochondrial fragility be ameliorated with medicines?  Isacson tested the ability of particular substance to mitigate this condition in the patient-specific iPSCs.  A supplement called Q10, which is known to aid mitochondrial function was administered the to Parkinson’s patient-specific iPSCs, was given to the cells, and all cells were prevented from experiencing mitochondrial damage after exposure to toxins.  However, when a different drug called rapamycin was administered, the results were very different.  Rapamycin diminishes the immune response of an organism, and therefore, it can spare weak cells from being cleared by the immune system.  Rapamycin prevented damage in the cells with mutations in LRRK2, but not those with mutations in PINK1.

This paper shows how iPSC-based research can lead to information that can fashion personal treatments for each patient.  Even though this work focused on Parkinson’s disease, there are many other diseases that could benefit from iPSC-based research.