During development, the nervous system forms from a tube that begins as deep indentations on the presumptive back of the embryo. This deep groove brings two folds of tissue very close together – so close that they fuse to form a tube called the neural tube. When the ends of the folds fuse together, cells stream from these folds and move down into the body of the embryo. These migrating cells are called :neural crest” cells, and they form a very wide variety of cell types. The cells inside the adrenal glands, the pigment-bearing cells of the skin, the ganglia on the digestive system, the flat bones of the skull, the heart valve cushions in the heart and some of the vessels of the heart, corneal cells of the eye, and other cells and tissues are all formed from the neural crest cells. Consequently, there is a great deal of interest in neural crest cells for the purposes of regenerative medicine. These cells have the capacity to regenerate a fair number of tissues, and there is a great desire to learn more about these cells. 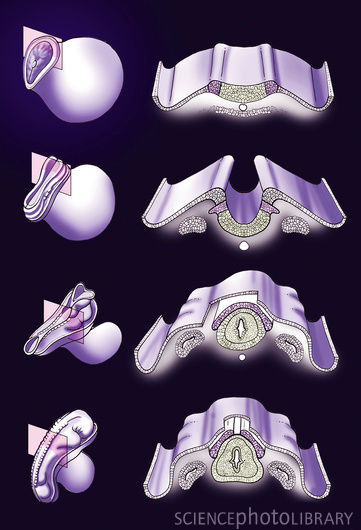 In particular, the neural crest cells in the head of the embryos give rise to a very wide range of head-specific tissues and there is a great deal in interest in learning more about them. To that end, Robert Maxson and his colleagues at the University of Southern California, in collaboration with Marianne Bronner (a former professor of mine at University California, Irvine), but now a California Institute of Technology, have made and characterized a new stable cranial neural crest cell line from mouse called O9-1.

To isolate cranial neural crest cells, mouse embryos that were genetically engineered to expressed a glowing protein in neural crest cells were dissected and the glowing cells were cultured. Apparently, these cells grow readily in culture and can be passaged indefinitely.

Gene expression studies showed that O9-1 cells expressed a gaggle of genes associated with neural crest cells 9AP-2alpha, Twist1, and Snail1). They also expressed some proteins that are considered to be the earmarks of genuine stem cells (CD44 and Sca-1). O9-1 cells maintained their ability to differentiate into many different cells types and still expressed all these interesting genes, even after growing in culture for 17-22 transfers.

To truly determine what kind of cells were represented by O9-1 cells, Maxson and his co-workers used a whole-genome expression profiling experiment. If such an experiment sounds like a lot of work, it is because it is. Because neural crest from different levels of the embryo have different developmental capacities, they often express different genes in combination with the neural crest-specific genes they express. First, O9-1 cells did not express genes commonly found in stable adult cells (no surprise there). However, they also did not express genes commonly found in neurons. This shows that these cells cannot be from the trunk because trunk neural crest, which tend to make nerves rather readily. Also, Thomas and others made trunk neural crest cell lines and these cells expression smooth muscle, glial and neuronal cell markers despite being passaged many times (see Thomas, et al., Human Molecular Genetics 17, 3411-25). Thus O9-1 cells make neural crest-specific genes, but they are almost certainly not trunk neural crest cells.

Having such cells to study and manipulate is very useful. Because neural crest cells differentiate into a wide variety of cell types, abnormalities in neural crest development underlie a whole host of human diseases. Discerning the biochemical signals that drive neural crest cells to differentiate into one cell type or another is key to unlocking the potential of these cell types for regenerative medicine and the role of the cells in the pathology of many different types of developmental disorders.