Fingertip amputation in mammals results in regeneration of the nail, the attendant nerves, and even the damaged bone. Humans can also regenerate a fingertip in as little as two months. This seemingly simple regenerative event remains poorly understood.

However work from the NYU Langone Medical Center has provided a greater understanding of this somewhat opaque event. By using genetically engineered mice, the NYU team was able to elucidate a chain of events that unfolds after finger amputation.

This may seem like a terribly small thing, but understanding the regeneration of a finger tip can lead to augmentation of this process so that eventually entire fingers can be regenerated and even entire limbs.

“Everyone knows that fingernails keep growing, but no one really knows why,” said lead author Mayumi Ito, assistant professor of dermatology in the Ronald O. Perelman Department of Dermatology at NYU School of Medicine. Also, the connection between the regenerative ability of the bone and surrounding to the growth and/or regeneration of the nail is equally poorly understood.

Ito and others have discovered an important clue, and that is a population of stem cells in the nail matrix. The nail matrix contains a bed that is rich in nerve termini and blood vessels that stimulate nail growth.

To review the structure of the nail, the nail plate consists of the hard visible part of the nail. The nail plate is composed of hard, keratinized, squamous cells that are loosely attached to the germinal matrix but strongly attached to the sterile matrix. The nail matrix is the tissue that a nail [nail plate] protects. It lies beneath the nail and contains nerves, lymph and blood vessels. The matrix is responsible for producing cells that become the nail plate. It has two parts: the sterile matrix and the germinal matrix. 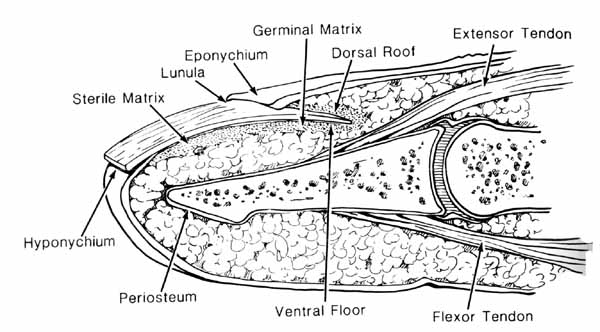 The stem cell population lies within the nail matrix, and these stem cells depend on a family of signaling proteins known as “Wnt” proteins. Wnt proteins are secreted glycoproteins that bind to Frizzled receptors. The Frizzled receptors bind Wnts and cause the polymerization of the Dsh or Disheveled protein at the cell membrane, and this inhibits GSK-3, a protein kinase. GSK-3 places phosphate groups on beta-catenin, and this marks beta-catenin for destruction. Once GSK-3 is inhibited, beta-catenin levels increase and it moves into the nucleus where it combines with Tcf proteins to activate the transcription of target genes. 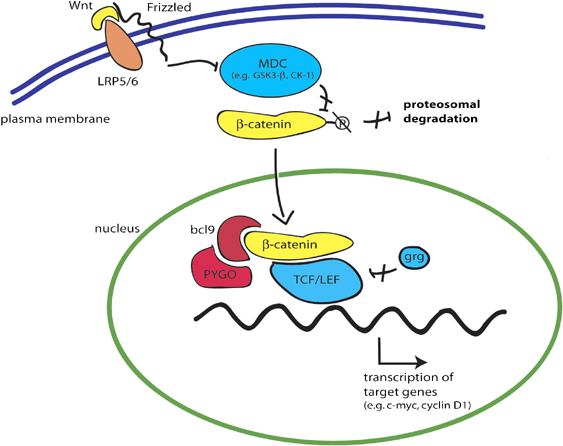 Ito recounted her experiments: “When we blocked the Wnt-signaling pathway in mice with amputate fingertips, the nail and bone did not grow back as they normally would.”

When Ito and her team manipulated the Wnt pathway they discovered that they could stimulate regeneration of bone and tissue just beyond the fingernail. “Amputations of this magnitude ordinarily do not grow back,” noted Ito.

These findings suggest that Wnt signaling is essential for fingertip regeneration, and indicate that the way to develop therapies for regenerating lost limbs is to more deeply understand Wnt signaling and its role in limb regeneration. Some 1.7 million people in the US alone live with amputations. Therefore, research of this type could prove remarkably useful.