Lawrence Goldstein, director of the UC San Diego Stem Cell Program and a member of the Departments of Cellular and Molecular Medicine and Neurosciences, has an abiding interest in Alzheimer’s disease (AD).  To that end, he and his colleagues have used genetically engineered human induced pluripotent stem cells to determine the role a particular protein plays in the causation of familial AD.  Apparently, a simple loss-of-function model does not contribute to the inherited form of this disorder.  Goldstein hopes that his findings might be able to better explain the mechanisms behind AD and help drug makers design better drugs to treat this disease.

Familial AD is a subset of the larger group of conditions known as early-onset AD.  The vast majority of cases of AD are “sporadic” and do not have a precise known cause, even though age is a primary risk factor (an estimated 5.2 million Americans have AD).  Familial AD is causes by mutations in particular genes.  One of these genes, PS1, encodes a protein called “presenilin 1,” which acts as a protease (an enzyme that clips other proteins in half).  Presenilin 1 is the catalytic component of a protein complex called “gamma-secretase.”  Presenilin 1 forms a complex with three other proteins (Nicastrin, Aph1, Pen2) to form gamma-secretase, and this enzyme attacks specific proteins that are embedded in the cell membrane and clips them into smaller pieces. 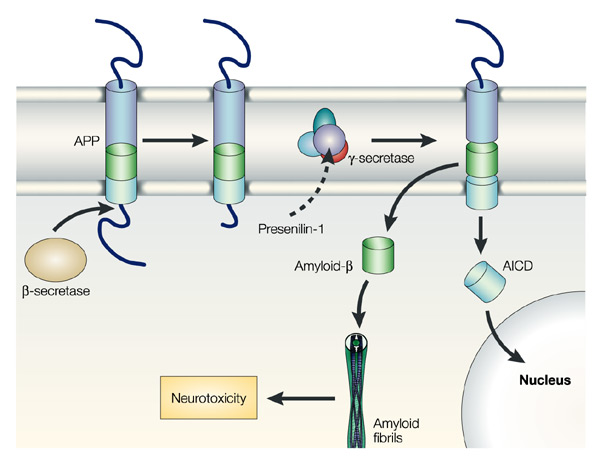 One of the substrates of gamma-secretase is a protein called amyloid precursor protein (APP).  While the function of APP remains unknown, APP cleavage by the gamma-secretase produces small protein fragments known as amyloid beta.

A consensus among AD researchers is that the accumulation of specific forms of amyloid beta causes the formation of the amyloid plaques that kills off neurons and leads to the onset of AD.  The most abundant product of gamma-secretase cleavage of APP is a protein called “Aβ40.”  This protein is forty amino acids long and does not cause any brain damage.  However, a minority product of APP cleave by the gamma-secretase is “Aβ42,” which is 42 amino acids long and forms the amyloid plaques and neurofibillar tangles that are so characteristic of AD (see Scheuner, D., et al., Nat. Med. 2, 864–870).

According to Goldstein, most of the time, gamma-secretase clips APP without causing any problems, but some 20% of the time, the protein clips APP incorrectly and this results in the plaque-forming forms of amyloid beta.  Goldstein explained: “Our research demonstrates very precisely that mutations in PS1 double the frequency of bad cuts.”

To demonstrate this, Goldstein and his co-workers purchased human induced pluripotent stem cells and differentiated them into neurons.  These neurons contained different alleles (forms) of the PS1 gene, and some of these mutant forms of PS1 contained the types of mutations that cause familial AD.  Once PS1 allele in particular called PS1 ΔE9 increased the ratio of Aβ42 to Aβ40 dose-dependent manner.  Since the PS1 ΔE9 causes familial AD, this research elucidates precisely why it does so.

“We were able to investigate exactly how specific mutations and their frequency change the behavior of neurons.  We took finely engineered cells that we knew and understood and then looked how a single mutation causes changed in the molecular scissors and what happened next.”

Goldstein further notes, “In some ways, this is a powerful technical demonstration of the promise of stem cells and genomics research in better understanding and ultimately treating AD.  We were able to identify and assign precise limits on how a mutations works in familial AD.  That’s an important step in advancing the science, in finding drugs and treatments that can slow, maybe reverse, the disease’s devastating effects.”

Professor of Biochemistry at Spring Arbor University (SAU) in Spring Arbor, MI. Have been at SAU since 1999. Author of The Stem Cell Epistles. Before that I was a postdoctoral research fellow at the University of Pennsylvania in Philadelphia, PA (1997-1999), and Sussex University, Falmer, UK (1994-1997). I studied Cell and Developmental Biology at UC Irvine (PhD 1994), and Microbiology at UC Davis (MA 1986, BS 1984). View all posts by mburatov