In a paper published by this team earlier in the journal Science this month, the EPFL team showed that, because of its flexibility, this next-generation e-Dura implant lasts longer (up to two months) and causes much less damage than traditional implants.

These latest results are an extension of earlier research in 2012 in which Courtine and Lacour published breath-taking results that showed spinal cord-injured rats that should have been paralyzed had regained the ability to walk, run, and even climb stairs.

Spinal cord injury results in loss of control over the part of the body below the point of injury. Courtine and his coworkers were able to reactivate the spinal cord in rats with a specific combination of drugs plus electrical stimulation to simulate the excitatory input from the brain. The drugs they used, monoamine agonists, bind to receptors and activate them in the same way that such neurotransmitters would in healthy subjects. When the spinal cord was exposed to these drugs plus mild electrical stimulation, the activated nerve cells in the spinal column produced movement in the paralyzed animals.

This movement, however, was largely involuntary, since the brain was not able to communicate with the area below the injured spinal cord. However, over time, as the animals trained and repeatedly walked in their harnesses (which kept them safe from falling); they became more confident in their ability to walk again. In fact, the EPFL team noticed a fourfold growth of new nerves in the spinal cord. This new nerve growth eventually restored communication between the brain and the injured area of the spine.

Courtine, whose eyes sparkle as he passionately talks about his research, is eager to take these findings to the clinic to see if they can help human beings who have suffered a catastrophic spinal cord injury. In preparation for clinical trials, however, they came up against another problem and that was the need for a long-term spinal implant that could deliver the chemical and electrical stimulation needed to initiate spinal cord healing. Courtine hopes that his e-Dura can satisfy this need. 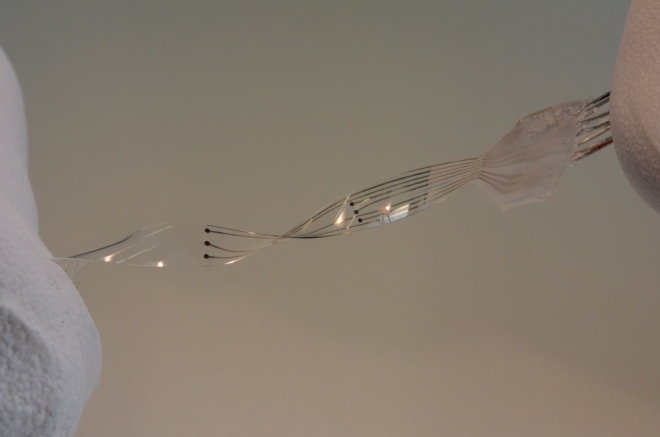 The e-Dura meets two important criteria for spinal implants: durability and biocompatibility. In order to reduce the number of surgical procedures an injured patient must undergo, an implantable device needs to last a long time. It also has to be biocompatible and flexible. Early generation implants caused inflammation and the formation of scar tissue, which usually offset any positive results the implant provided.

When tested on laboratory animals, Courtine’s laboratory applied the e-Dura implant beneath the protective dura mater, directly on the spinal cord. Thankfully, the implant did not cause any adverse effects and lasted long enough for the paralyzed animals to complete their rehabilitation. Functionally, the implant also performed very well.

The e-Dura unit contains very small microfluidic channels that are embedded on a flexible silicon substrate. The device delivers precise amounts of drugs directly to the nerve cells in the spinal cord. Cracked gold conducting wires and electrodes that are made of a composite material that consists of silicon and platinum send electrical signals to the injured spinal cord. Electronic circuitry in the implant also provides the opportunity for the EPFL team to monitor the electrical messages sent back and forth to the brain as the new nerves are activated.

Indeed, this research is wonderfully exciting, but it is unclear how well it will work in humans. First of all, humans will probably need a different cocktail of drugs or a distinct electrical stimulation pattern to stimulate the spinal cord to heal itself. As with much clinical research at the beginning stages, there many unanswered questions to date. Advanced clinical trials will hopefully uncover some of these idiosyncrasies that characterize the injured human spinal cord and such answers are an integral part of providing a protocol that applies uses technology to human patients.

While exoskeleton technology also continues to approach consumer markets, it would be better to return to people their natural ability to walk. However you slice it, spinal cord injury patients may have more options in the coming years.