Researchers at the University of California, San Diego School of Medicine have published a series of proof-of-concept experiments that demonstrate the ability to direct medically relevant cell behaviors by artificially manipulating a central hub in cell communication networks. The manipulation of this communication node, which was reported in the journal Proceedings of the National Academy of Sciences, makes it possible to reprogram major parts of a cell’s signaling network instead of targeting only a single receptor or cell signaling pathway.

This discovery could have tremendous clinical value, since it could slow or reverse the progression of diseases, such as cancer, which are driven by abnormal cell signaling along a variety of signaling pathways.

“Our study shows the feasibility of targeting a hub in the cell signaling network to reset aberrant cell signaling from multiple pathways and receptors,” said senior author Pradipta Ghosh, MD, an associate professor of medicine.

The UC San Diego team engineered two small protein fragments, known as peptides, to either turn on or turn off the activity of a family of proteins called G proteins. G protein-coupled receptors, which are embedded into the surfaces of cells, are used by cells to sense and respond to their environments. Approximately 30 percent of all prescription drugs target cells by binding to and affecting G protein-coupled receptors. 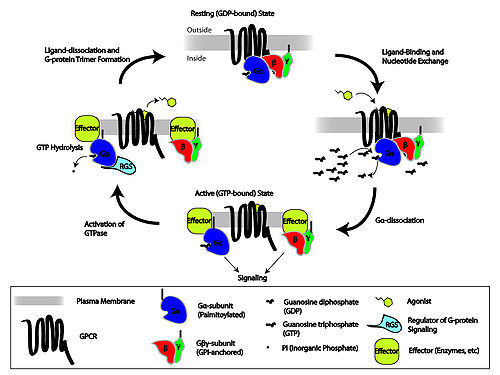 Several laboratories, including those at UC San Diego, have discovered that G proteins can also be activated inside cells, and not simply on cell surfaces. Other receptors can activate the internal components of the G protein-coupled receptor, as can a protein called GIV. GIV has been implicated in cancer metastasis and other disease states. Both the “on” and “off” peptides were made from parts of the GIV protein receptor.

In a series of cell culture experiments, the “on” peptides were shown to accelerate the ability of the cells to migrate after scratch-wounding, which is a process linked to wound healing. The “off” peptide, in contrast, reduced the aggressiveness of cancer cells and decreased the production of collagen by cells associated with liver fibrosis. In experiments with mice, the topical application of the “on” peptides helped skin wounds heal faster.

“The takeaway is that we can begin to tap an emerging new paradigm of G protein signaling,” Ghosh said.