B vitamins called folates can stimulate stem cell proliferation independently of their role as vitamins.  This is according to a collaborative study from the University of Georgia and Tufts University, which used a cell culture system in addition to a live animal model system to establish these results.

Folates, whether supplemental B vitamins or natural folates found in food, are an essential cofactor for single-carbon transfer reactions.  Folates are integral for the proper functioning of all cells in the body and are critical to prevent birth defects, in particular defects of the neural tube (spinal cord).

This study shows, for the first time, that an adult stem cell population is controlled by an external factor arising from outside the animal. The animal model system was the small, free-living roundworm, Caenorhabditis elegans.

Is this the case for human stem cell populations?  Difficult to say, but it surely can’t hurt to make sure that you are getting enough folate in your diet.

Researchers from the Salk Institute for Biological Studies in La Jolla, CA and collaborators from Ecole Polytechnique Fédérale de Lausanne in Switzerland and Massachusetts Institute of Technology in Cambridge, Massachusetts have developed a new benchmark for generating the most primitive type of stem cell. These new molecular criteria can allow scientists know just how close laboratory-generated “naïve stem cells” mimic embryonic blastomeres that exist in the very earliest stages of human development.

Naïve stem cells are “totipotent,” which means that they can differentiate into any cell type in either the adult body or in the embryo, including placenta. These cells constitute the primordial cells that produce all the cells of the human body and those that make up the placenta as well. Most of the published protocols to generate so-called naïve stem cells, however, are rather inefficient. They tend to produce cells that are very much like the starting pluripotent cells and produce few changes in gene expression.

The Salk team and their collaborators used a battery of molecular tests on these “primed” cells and embryonic stem cells (ESCs) that had been exposed to factors that are thought to induce the naïve state. Their experiments compared gene expression in ESCs with ESCs that had been subjected to the laboratory protocols to convert them into naïve stem cells, and blastomeres from early embryos. The discovered that three main tests were the most indicative of the differences between naïve stem cells and other stem cells.

First, they measured the expression levels of transposons, DNA sequences that can jump around the genome. It was clear that the expression of transposons provided a sensitive measure of the similarities pluripotent stem cells and early human development. In fact, naive human ESCs shared a unique transposon signature with cleavage-stage embryos, and the expression of certain transposons was indicative of naïve stem cells. Next, they found that the genomes of naïve embryonic stem cells have less methylation (the addition of methyl chemical groups or –CH3 groups – to the bases of DNA. They then examined the state of X chromosomes in naïve cells of female embryos’, which contain two active X chromosomes, unlike more mature embryonic cells that have silenced one of the X chromosomes. These three tests collectively include tens of thousands of genetic biomarkers to characterize the developmental state of stem cells. 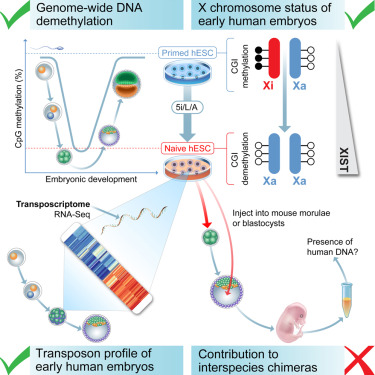 When current methods for generating naïve stem cells in the lab were judged using the three tests, each fell short of fully mimicking the naïve embryonic cells in different ways. One new technique, for instance, led to cells that had two active X chromosomes but didn’t match the exact methylation patterns desired. In fact, none of the current, published protocols lead to truly naïve stem cells.

These established guidelines may help researchers achieve that goal and eventually elucidate where the current methods fall short. Generating naïve stem cells would be a boon to both basic research and to medical applications of stem cells. The analysis provided in this paper is likely to become a gold standard for quality control of stem cells, including induced pluripotent stem cells, regardless of their use in research or in clinical applications.