However, iPSCs suffer from an increased mutation rate when they are made and these increased mutation rate increases their risk of causing tumors and being rejected by the patient’s immune system. Having said that, not all iPSCs are created equal, and the safety of iPSCs seems to be very line-specific. Thus, how do you know a good stem cell from a bad one?

Yale Stem Cell Center researchers led by Andrew Xiao Yale have published a report in the Sept. 4 issue of Cell Stem Cell in which they describe an indicator that seems to predict which batch of personalized stem cells will differentiate into patient-specific tissue types and which will develop into unusable placental or tumor-like tissues.

Xiao’s group identified a variant histone protein called H2A.X that seems to predict the developmental path of iPSC cells in mice. Histone proteins assemble into tiny spools around which DNA winds. This DNA spooling allows cells to tightly package their DNA into a tight, compact structure that is easily stored called “chromatin.” Histones that are commonly used include histones H2A, H2B, H3 and H4.

Two copies of each of these proteins assemble into a globular structure called a core histone and the DNA of the cell winds around this core histone to form a “nucleosome.” Then linker histones (H1 or H5) take these nucleosomes package them into spiraled coils. 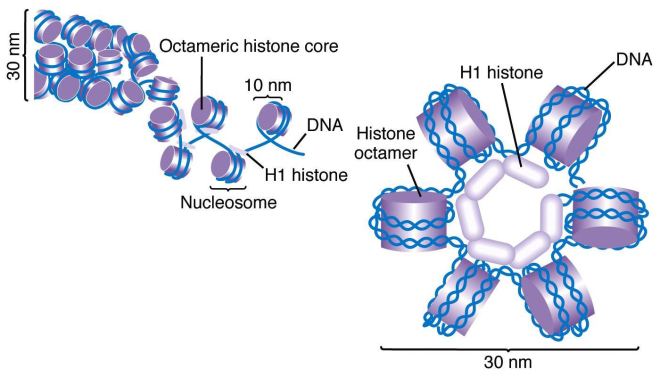 H2A.X is a variant version of histone H2A is modified when DNA damage occurs. Modified H2A.X signals to the DNA repair machinery to fix the broken DNA (see TT Paull, and others, Curr. Biol. 10(15):886–95).

According to the data from Xiao’s research team, in pluripotent stem cells, H2A.X is specifically targeted to those genes typically expressed in cells used to make the placenta, and it helps suppress differentiation of pluripotent stem cells into cells of the placental lineage. Given this distribution in mouse embryonic stem cells, H2A.X deposition pattern is a functional marker of the quality of iPSCs. Conversely, defective H2A.X deposition predisposes iPSCs toward differentiating into placental-type cells and tumors.

“The trend is to raise the standards and quality very high, so we can think about using these cells in clinic,” Xiao said. “With our assay, we have a reliable molecular marker that can tell what is a good cell and what is a bad one.”