If someone has any evidence of a thyroid tumor, then the thyroid is removed, and the patient must take oral thyroid hormone. Because getting the dose right can be difficult, we might ask, “Can we replace the thyroid with stem cell treatments?”

Human pluripotent stem cells can differentiate into balls of cells that are mini-organs called “organoids.”  Unfortunately, if left to themselves, the formation of these organoids is rather haphazard and the cells tend to differentiate into a whole host of different cell types. This is not fatal, however, since the differentiation of these stem cells can be orchestrated by using growth factors or certain culture conditions. Can we use such innovations to make a minithyroid?

Darrell Kotton and his group at Boston University School of Medicine Pulmonary, Allergy, Sleep and Critical Care Medicine have spent their time tweaking the conditions to drive human pluripotent stem cells to form thyroid cells. A new study of theirs that appears in the journal Cell Stem Cell details how the use of two growth factors, BMP4 and FGF2 can drive pluripotent stem cells to commit to thyroid cell fates.

In order to make thyroid cells from embryonic stem cells (ESCs), Kotton and his group had to make endodermal progenitors from them first. Fortunately, a study from Kotton’s own laboratory that was published in 2012 employed a technique used in several other papers that grew ESCs in a serum-free medium with a growth factor called activin. Christodoulou, C., and others (J. Clin. Invest. 121, 2313–2325) showed that over 80 percent of the ESCs grown under these conditions differentiated into endodermal progenitors.  When Kotton and his colleagues cultured these endodermal progenitors in BMP4 and FGF2, some of them differentiated into thyroid progenitor cells. Interestingly, this mechanism by which thyroid-specific cell fates are specified is conserved in creatures as disparate as frogs and mice.

To make mature thyroid cells from these progenitors, a three-dimensional culture system was used in combination with thyroid stimulation hormone and dexamethasone. Under these conditions, the cells formed spherical thyroid follicles that secreted thyroid hormone. To perfect their protocols, Kotton’s group used mouse ESCs, but they additionally showed that this same strategy can make mature thyroid cells from human induced pluripotent stem cells (iPSCs). 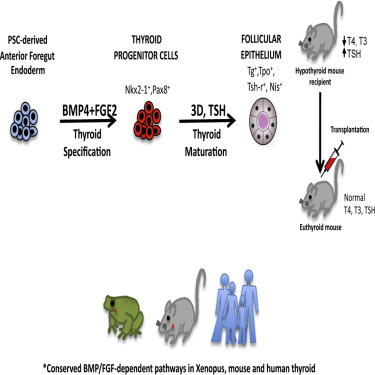 The appearance of cells in a culture system that look like mature thyroid follicles and express many of the same iodine-metabolizing enzymes as mature thyroid cells is exciting, but can such cells stand in for thyroid tissue in an animal that lacks sufficient thyroid tissue?

Kotton’s laboratory took this to the next step by transplanting their cultured thyroid follicles into laboratory mice that lacked a functional thyroid. These transplants were not inserted into the neck of the animal, but instead were place underneath the kidney, which is area rich in blood vessels. Interestingly, the implanted thyroid “organoids” or little organs did not fall apart upon transplantation. Instead they retained their characteristic structure. More interestingly, these organoids kept expressing iodine-metabolizing enzymes and made thyroid hormone. The synthesis and release of thyroid hormone was also regulated by the hypothalamic hormone thyroid stimulating hormone (TSH). TSH is made and released in response to insufficient thyroid hormone levels. The thyroid responds to TSH by making a releasing more thyroid hormone, which causes a feed-back inhibition of the release of TSH. The fact that these implanted organoids were properly regulated by TSH bespeaks of the maturity of these cells. Also, significantly, none of the laboratory animals showed any signs that the implanted cells had formed any tumors.

Kotton and his coworkers were also able to used human ESCs and human iPSCs to make thyroid organoids. Human iPSCs-derived thyroid organoids were made from human patients with normal thyroid function and from hypothyroid children who carry a loss-of-function mutation in the NKX2-1 gene. This show that Kotton’s system can be used as a model to study inherited thyroid deficiencies. However, there is even more excitement that this system or something similar to it might be useful to safely treat thyroid loss in patients who have lost their thyroid as a result of cancer, or injury.

In a paper published in the international journal Nature, lead author Francesco Antonica and her colleagues used mouse embryonic stem cells for these experiments. Antonica and others engineered these cells to express two transcription factors; NKX2-1 and PAX8. They used a trick to engineer these cells so that they would only express these genes if they were treated with the drug doxycycline. A variety of experiments showed that the genetic manipulation of the cells did not affect their pluripotency.

After genetically engineering their mouse embryonic stem cells, they grew half of them without doxycycline and the other half in the presence of doxycycline. Three days after growing cells on doxycycline, the cells expressed high levels of Pax8 and NKX2-1, and also showed high levels of expression of thyroid-specific genes such as thyroid-stimulating hormone (TSH) receptor (Tshr), the sodium/iodide symporter NIS (Slc5a5) and thyroglobulin (Tg), as well as Foxe1, which is yet another key transcription factor for thyroid development. In contrast, the cultures without doxycycline showed no such changes in gene expression.

These cells, however, did not stop there. 22 days after being grown on doxycycline, the cells rounded up and formed clusters that exactly resemble those found in a living thyroid gland. The resemblance to thyroid glands, however, was not superficial. Thyroid-specific proteins were detected in these clusters. Those cells formed a circle that surrounded a space and it also showed proper localization of thyroid-specific proteins. There is a protein found on the bottom of the thyroid celll called NIS, which stands for sodium/iodide symporter. This proteins transports two sodium cations (Na+) for each iodide anion (I–) into thyroid cells. The uptake of iodide into follicular cells of the thyroid gland is the first step in the synthesis of thyroid hormone. Another protein found at the bottom of thyroid cells called E-cadherin helps the cells stick to each other.

So, it looks like a thyroid, it makes the same genes as a thyroid, but is it a thyroid functionally speaking? To answer this question, Antonica and colleagues took normal mice and feed them radioactive iodine. This destroys the thyroid and they were able to confirm that these mice were devoid of thyroid activity and showed the symptoms of hypothyroidism. Then they grafted their ESC-derived thryoid cells into the kidney capsule of the hypothyroid mice. The grafts took and tissue examination showed that the grafts looked like thyroid tissue and also expressed thyroid-specific proteins. Therefore, transplantation of the ESC-derived thyroid tissue does not change its characteristics.

Amazingly, 8 or 9 hypothyroid mice that had received the grafts recovered full thyroid function. Those hypothyroid mice transplanted with ESCs that were not grown in the presence of doxycycline showed no signs of recovery from hypothyroidism.

These experiments show that ESCs can be differentiated into thyroid follicles that can serve as an excellent model for thyroid physiology and development. Such a model system can also be used to test thyroid drugs and model thyroid diseases. Additionally, such cells can also potentially be used to treat thyroid diseases. If this technology can be recapitulated with human pluripotent stem cells – particularly with induced pluripotent stem cells and might be patient specific, then a ready-made treatment for patients who have lost their thyroids as a result of surgery is potentially at hand.