First a little background. In 2007, Ian Chambers and others published a paper in the journal Nature that examined the expression and function of Nanog in embryonic stem cells. Chambers and others found that Nanog expression levels in individual embryonic stem cells from a culture derived from a single cell varied wildly.  The figure from the Chambers et al paper is shown below.

The reason for this fluctuation in Nanog levels was uncertain, but Chambers and others showed that Nanog could be deleted from mouse embryonic stem cells without affecting their ability to contribute to various sundry embryonic tissues during mouse development, even though they do not make functional gametes (eggs and sperm).  In fact, mouse embryonic stem cells can self-renew under particular conditions without a functional copy of the Nanog gene even though they are prone to differentiation.  From this, Chambers and others concluded that Nanog stabilized rather than promoted pluripotency of embryonic stem cells by “resisting or reversing alternative gene expression states.”

Now if we fast forward one more year and a paper from the journal Cell Stem Cell and a letter to the same edition of this journal, we have an article by Dina Faddah and others from the laboratory of Rudolf Jaenisch at the Whitehead Institute (MIT, Cambridge, MA), and a supporting letter from Adam Filipczyk and others from Germany and Switzerland.  In this article, the authors also double-labeled mouse embryonic stem cells and examined multiple cells and showed that BOTH copies of Nanog were expressed, and that the range of variability of Nanog expression was approximately the same as other pluripotency genes.

Filipczyk and others used a similar approach to examine the expression of Nanog in mouse embryonic stem cells and they came to the same conclusions as those of Faddah and others.

Jaenisch sees this as an instructional tale for all stem cell scientists.  He noted: “Clearly, the conclusions for this particular gene need to be reconsidered.  And it raises the question for other genes.  For some genes, there might be similar issues.  For other genes, they might be more resistant to this type of disturbances caused by a reporter.”

Bottom line – read the materials and methods part of the paper carefully because the way these experiments are done can determine if the results are trustworthy.

When I was an undergraduate, I cut up planarians in the laboratory and watched them regenerate. Planarians are a type of free-living flatworm that has an uncanny ability to regenerate. Cut them in half, and the tail half will grow a head and the head half will grow a tail. Cut them in half, and the left half will grow a new right side and the left half will grow a new left side. They are truly remarkable critters. How do these worms do this? It appears that the cells of this worm can de-differentiate and become like embryonic cells that originally made the damaged structures. Essentially, the bit of the worm that needs to regrow, recapitulates the developmental process that made it in the first place.

In this way, the bodies of planarians act like stem cells. Stem cells have the potential to regenerate tissues that have been irreparably damaged. One of the problems with stem cells is how to control them. Yet planarians have a genome full of genes that have human homologs. Therefore, planarians seem a logical choice as a model system to study stem cell behavior. Yet, until now, scientists have been unable to efficiently identify the genes that regulate the planarian stem cell system.

At the Whitehead Institute, Peter Reddien‘s lab has revealed some unique insights into planarian biology. These discoveries might help stem cell scientists deliver on a promising role in regenerative medicine. Published in the journal Cell Stem Cell, Reddien and his co-workers used a novel approach to identify and study those genes that control stem cell behavior in planarians. Perhaps unsurprisingly, at least one class of these genes has a counterpart in human embryonic stem cells.

Once injured, planarians (Schmidtea mediterranea) use stem cells, called cNeoblasts, to regrow missing tissues and organs. Within about a week after being injured, the worms have formed two complete planarians. These cNeoblasts are similar to embryonic stem cells in that they are “pluripotent,” which simply means that they have the capacity to form almost cell type in the body. In order to regrow damaged tissues, researchers want to be able to turn on pluripotency and then turn it off after cells have replaced the damaged or missing adult cells. 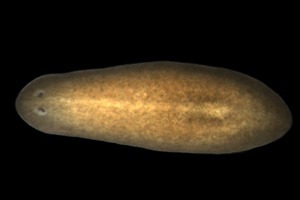 Reddien, associate professor of biology at MIT and a Howard Hughes Medical Institute (HHMI) Early Career Scientist, said this about his paper: “This is a huge step forward in establishing planarians as an in vivo system for which the roles of stem cell regulators can be dissected. In the grand scheme of things for understanding stem cell biology, I think this is a beginning foray into seeking general principles that all animals utilize. I’d say we’re at the beginning of that process.”

Dan Wagner, a postdoctoral research fellow in Reddien’s lab, and Reddien constructed a protocol to identify genes that regulate the differentiation and renewal of the stem cell population. After identifying genes active in cNeoblasts, Wagner exposed the planarians to ionizing radiation. This left only one surviving cNeoblast in each planarian. After this treatment, each cNeoblast can divide and form colonies of new cells that will differentiate into distinct cell types and divide at specific rates.

Now Wagner and his colleagues eliminated each of the active genes, one per planarian, and observed to determine the behavior of the surviving cNeoblasts without that missing gene. Because the cNeoblasts divide and differentiate at a reproducible rate, the research group could easily determine the role of each gene in cNeoblast behavior. If a colony cNeoblasts was missing a particular gene and had fewer stem cells than the controls, that gene plays in stem cell renewal. Conversely, if the colony had fewer differentiated cells than normal, then the missing gene played a role in differentiation.

Wagner explained, “Because it’s a quantitative method, we can now precisely measure the role of each gene in different aspects of stem cell function. Being able to measure stem cell activity with a colony is a great improvement over methods that existed before, which were much more indirect.”

This screen identified 10 genes that affect cNeoblast renewal, and two of these genes also play roles in cNeoblast renewal and differentiation. Three of the stem cell renewal genes are rather interesting because they code for proteins that are similar to components of Polycomb Repressive Complex 2 (PRC2). PRC2 is known to regulate stem cell biology in mammalian embryonic stem cells and other types of stem cells as well.

These data suggests that the mechanisms that control stem cells in planarians and mammals certainly share some similarities. This might even extend to the mechanisms by which cNeoblasts and embryonic stem cells maintain their naive developmental state. Such work might lead to more insights into stem cell biology that will allows better control and manipulation of stem cells, which will make their use in regenerative medicine much safer.